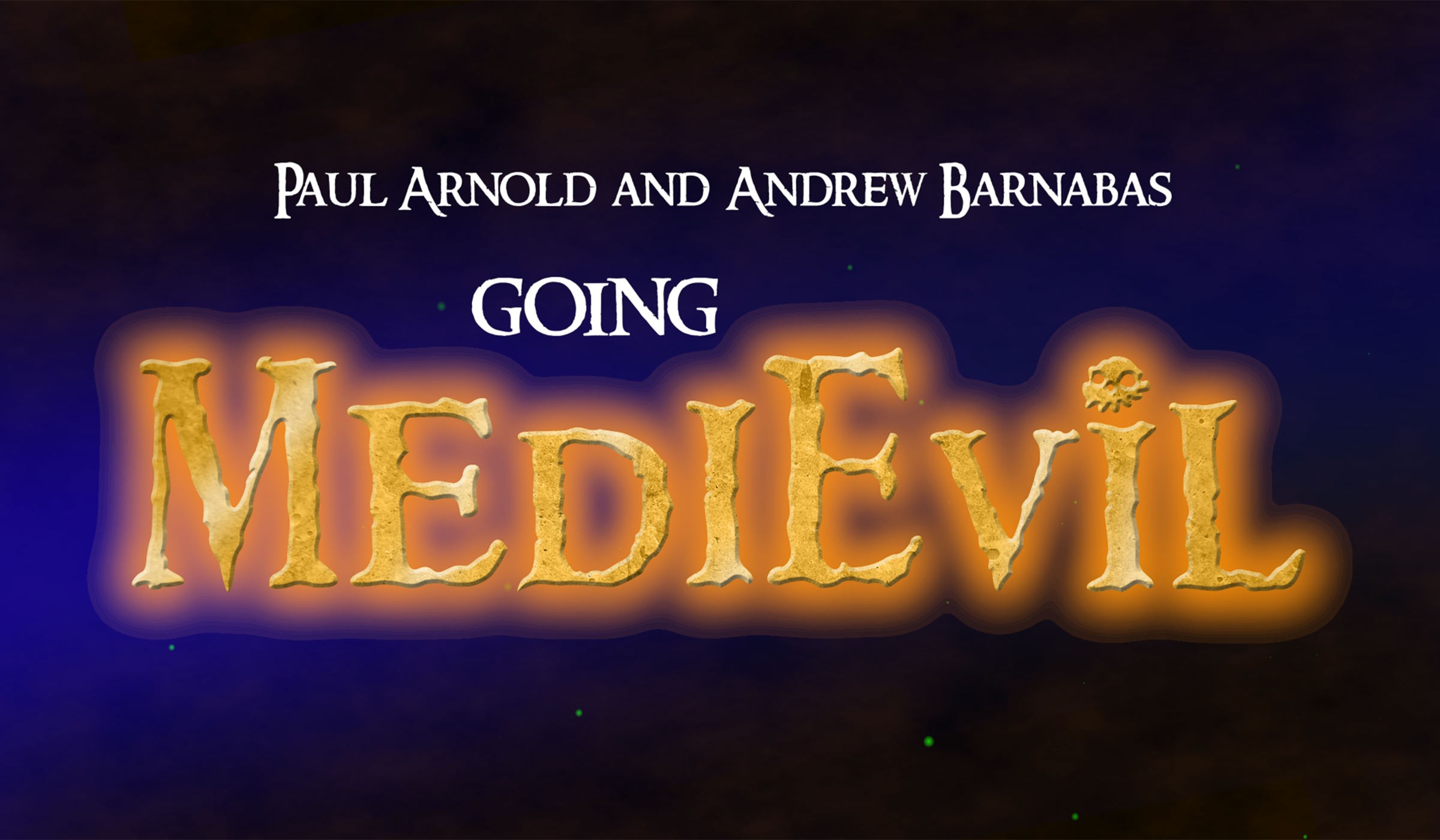 B&B in conjunction with Official PlayStation Magazine, Sony, Other Ocean, the Royal Philharmonic Orchestra, director Richard Jackson and writer Toby Venables produced an 11 minute documentary called Going MediEvil about their 23 year legacy with MediEvil. This mini-doc was released on Games Radar, OPM’s gaming portal this Halloween to coincide with the anniversary of MediEvil PS4’s release. Below is a copy of the launch article written by OPM’s editor Ian Dean, and you can watch the doc above.

There are few better Halloween treats than playing through Medievil, and if you have a PlayStation Now subscription you can play the excellent PS4 remake for free this weekend.

Aside from the Python-esque humour, a standout of the game is the Danny Elfman inspired soundtrack by composers Bob & Barn (AKA Paul Arnold and Andrew Barnabas) remains one of the best in videogames. A new documentary about the making of Medievil’s new, fully orchestrated soundtrack for the remake can be watched on Official PlayStation Magazine’s YouTube channel this weekend.

Inside the MediEvil soundtrack

In 1998, when Bob & Barn were asked to create an orchestrated soundtrack they found it a “daunting task” because the duo only had a synth, a Roland JV-1080, and sampler. Coming from the same Amiga demo scene as Jesper Kyd, Andrew Barnabas in particular was more used to the cyber parties and raves of the 1990s (Barnabas once hosted a 5,000 person event in Norway) than the lush orchestration of Hollywood.

Inspired by A Nightmare Before Christmas as much as ’80s arcade classic Ghouls ‘N’ Ghosts the composers had a clear identity for the soundtrack. “But it was something which I’d never done before,” says Andrew Barnabas as he reflects on making the original music. “That was really the most important thing, I’d never written music in an orchestral style. That was a bit of a challenge, especially back in the ’90s.”

By sampling orchestral CDs and inputting samples in manually the duo soon began to sculpt the music we’ve come to love piece by piece. “Extrapolating and kind of pulling the score apart, was enormously satisfying, very difficult, very daunting, but at the same time, very satisfying.”

Going back, however, to re-record the music for the PS4 remake the pair found their music “rather crude”. In fact Barnabas reveals the original plan for the remake was to create a new score and not use the original. “The first demo that we did for Sony, was to take one of the first tracks and then turn it into a new score.”

Having worked on every Medievil game, the pair found creating new music for the remake like riding a bike. “We sat there just throwing ideas left and right into the sequencer,” says Barnabas.

Some of the quirks of the original score came about because of the format, reveals Paul Arnold. On PS1 the music wasn’t interactive so it was this wall of sound. “We treated it more like wallpaper,” says Arnold. “Each of the tracks were constructed in a way that they’d kind of come in at fairly low volume, and then build to a crescendo in the middle and then, you know, taper off towards the end and then loop.”

But many fans loved how the original non-interactive music sounded, to the extent that the composers had to deflect angry responses online to them reworking the music for PS4 and making it fully interactive.

Barnabas explains: “All we did was do it how we would have loved to have done it back in 1998 but weren’t able to because the budget wasn’t there for a full orchestra and neither was the technology to make it interactive.”

Changing how music was made for games

That wasn’t to say PlayStation’s introduction of the CD player wasn’t a major shift in how music could be made for games. “That was probably the biggest fundamental shift as a games composer that you had […] this was the first time that the technical way you could present music wasn’t restricted by the sound capabilities of the platform. It meant your music could sound like real music.”

It was a double-edged sword, however, as musicians such as Bob & Barn who had spent years working on chip music and writing drivers since the days of the C64 found themselves in competition with composers from TV and film.

“One of the main barriers to entry to writing music for games back in those days was the fact that it was so technically demanding. Back in those days [before PS1] you really were sat in front of a screen of code and saying: ‘that’s my tune’.”

But it did mean the pair could eventually go into a studio, record artists and orchestras, and create far richer music. It also meant a musician familiar with using a keyboard and a computer now needed to understand how a studio worked.

The duo now create complex soundtracks for games, TV, and film. The BAFTA-nominated duo were among the first games composers to score for a full orchestra and chorus, for Sony’s Primal.

“Medievil’s been the linchpin of everything that we’ve done. Something that’s followed us throughout the entirety of our careers”

The arrival of the CD also meant the musicians were in competition with the game’s coders for how to use the disc. “During the development of Medievil there was talk of the possibility of keeping the streaming capabilities of the CD in the PlayStation for streaming graphics in real time, so they could make it look better,” says Arnold. “So there was a period of time where we weren’t actually certain that we were going to be able to stream music directly. It wasn’t an absolute given […] it was exciting, but at the same time, we were also terrified that this world would have opened up for us and then immediately close before we get the chance to use it.”

Thankfully the pair got their way and Medievil’s soundtrack got to be made how it was intended because the music can be enjoyed beyond the confines of the game. The introduction of the CD started our love of game soundtracks. “I think if you make the music more accessible, and people can get their hands on it more easily then of course they will listen to it, and they will appreciate it. Because it’s an independent art form,” says Arnold.

There’s little doubt in the artistry on show in Medievil’s signature tune, the Gallowmere Waltz, which has appeared in every version of the game. “Medievil’s been the linchpin of everything that we’ve done,” says Arnold. “Something that’s followed us throughout the entirety of our careers and it’s always a great privilege to get to revisit that and work in that world again.”

And to think, that partnership could well have been over before it even began, as the documentary reveals. Bob – then employed not as a composer on the project, but sound designer – wrote a sneaky tune whilst Barnabas was on holiday. “I didn’t know whether Barn would spit feathers…” says Arnold. “I just wanted to have a go!”