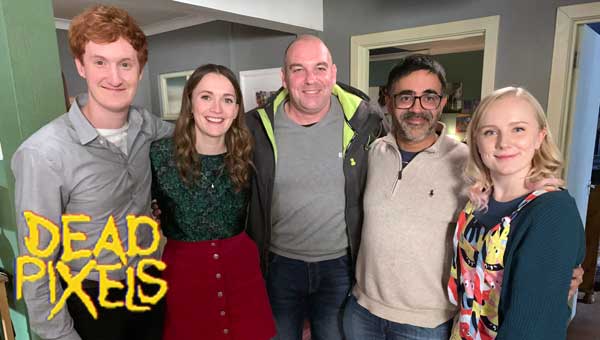 We have a hit, hoorah!

Season 1 of Dead Pixels it turns out was the most successful scripted comedy on E4 since The Inbetweeners! As such it’s now being shown around the world, we’ve had reports of friends who’ve seen it in France, Belgium, USA and Australia. So a second series was quickly greenlit. It’s bigger, better and most importantly funnier – we even managed to record an orchestra for it! We started scoring in early 2020 just before lockdown and finished it in the summer. As Tanya the wonderful series producer put it – ‘It’s our gift for lockdown’.

We had a great laugh visiting the set during filming late last year, here’s a pic of us in the eponymous flat. From l-r Will Merrick (Nicky), Charlotte Richie (Alison), B&B, Alexa Davies (Meg).